WHY LAKE NAKURU NATIONAL PARK IS A MUST VISIT?

Lake Nakuru National Park is one of the Kenyan premier parks together with Amboseli National Park which are under the management of Kenya Wildlife Service. The Park spreads on the flow of the great east African rift valley set to the backdrop of spectacular escarpment ridges. Lake Nakuru is one of the rift valley soda lakes and it is a home of millions of lesser and greater flamingoes. Lake Nakuru National is located at the proximity of Nairobi City approximately 160km away.

Lake Nakuru safaris can be visited all year round but the best seasons are from June to September and from January to March. Also get more information about the famous Masai Mara National Reserve.

The Masai Mara in Kenya is arguably one of the most well-known travel destinations in Kenya and the world at large. This is because Masai Mara is rich a high concentration of the big five and thousands of other wildlife animals. Also, it is a true representation of the wilderness in its pristine state. Being a tourist hub, the Masai Mara is home to many luxury and budget camps that offers accommodation to every type of tourist including the budget traveler. Here is a list of the best Masai Mara camps to book your accommodation while touring the Mara.

This is a tented camp that is located along the shady banks of River Talek. It offers a perfect accommodation for families with children since it is a fenced camp where children can walk comfortably without the fear of crossing paths with animals in addition to a heated swimming pool and free wifi. The beautiful camp offers unique game viewing experience early in the mornings, mid-mornings, and late in the afternoons. Get in-touch with Divulge Adventures and get to visit one of the specious camps in Masai Mara

This is a luxury camp located in the Masai Mara environment. Here, you get a combination of comfort, beauty, and adventure.  You will experience unending opportunities for game drives. The camp has ensuite bathrooms, dining room, private deck, and breathtaking views of the wilderness.

Along the Mara riverine is the gorgeous little Governor’s tented camp. This beautiful camp is only accessible by a boat which makes the experience more fun. The tents are built around a waterhole where warthogs and elephants come to quest their thirst. It is a place to enjoy game drives, guided walks, and hot air balloon rides at dawn that gives you a magical experience of the Masai Mara.

Set amongst the forest at the foot of the scenic Oloololo escarpment ( the rim of the Great Rift Valley) in Kenya’s iconic Masai Mara National Reserve, is the classic and elegant Bateleur Camp enhanced by serene and ambience of nature and tranquility. Bateleur Camp offers incredible views of the wilderness where you can see animal activity right from your camp. Also, the camp has some of the most comfortable tents at a fair price. Food served here is not disappointing either. If you are looking for real African dishes, this is the place to be. Remember Divulge Adventures got this for you. Make your holiday or honeymoon bookings with Divulge Adventures and rest be assured it will be a remarkable one.

This is a beautiful home away from home in an ideal location situated directly in the path of the wildebeest migration. Here, you get to experience both day and night game drivers, bush picnics, and guided walks. The camp also has a sensational swimming pool with an amazing view. This is a destination for holidays, vacations and honeymoons, at Divulge Adventures we are ready to plan a perfect getaways for ours esteemed clients to such destinations for spectacular events likes Wildebeests Migration.

This is a famous camp in the Masai Mara that is fully furnished with antique campaign furniture which makes it one of the most romantic camps in Africa. Its historic décor represents a golden era of safari. It is located in an exclusive private area being an ideal place for those who do not love crowds. Watching animals doing their activities while sitting in a bathtub sipping your favorite drink is very surreal. The camp creates memorable moments for couples, families, and honeymooners.

Naboisho camp I situated in a private setting that limits the number of people and vehicles in the area. They offer guided bush walks, big 5 game drive viewing, and night game drives to view the nocturnal animals and the big cats.

With the many camps in Masai Mara, choosing the most suitable one can be a daunting task. Travel with Divulge Adventures and let us help you book accommodation in a camp that is within your budget and needs. Contact us here to know more about our services. 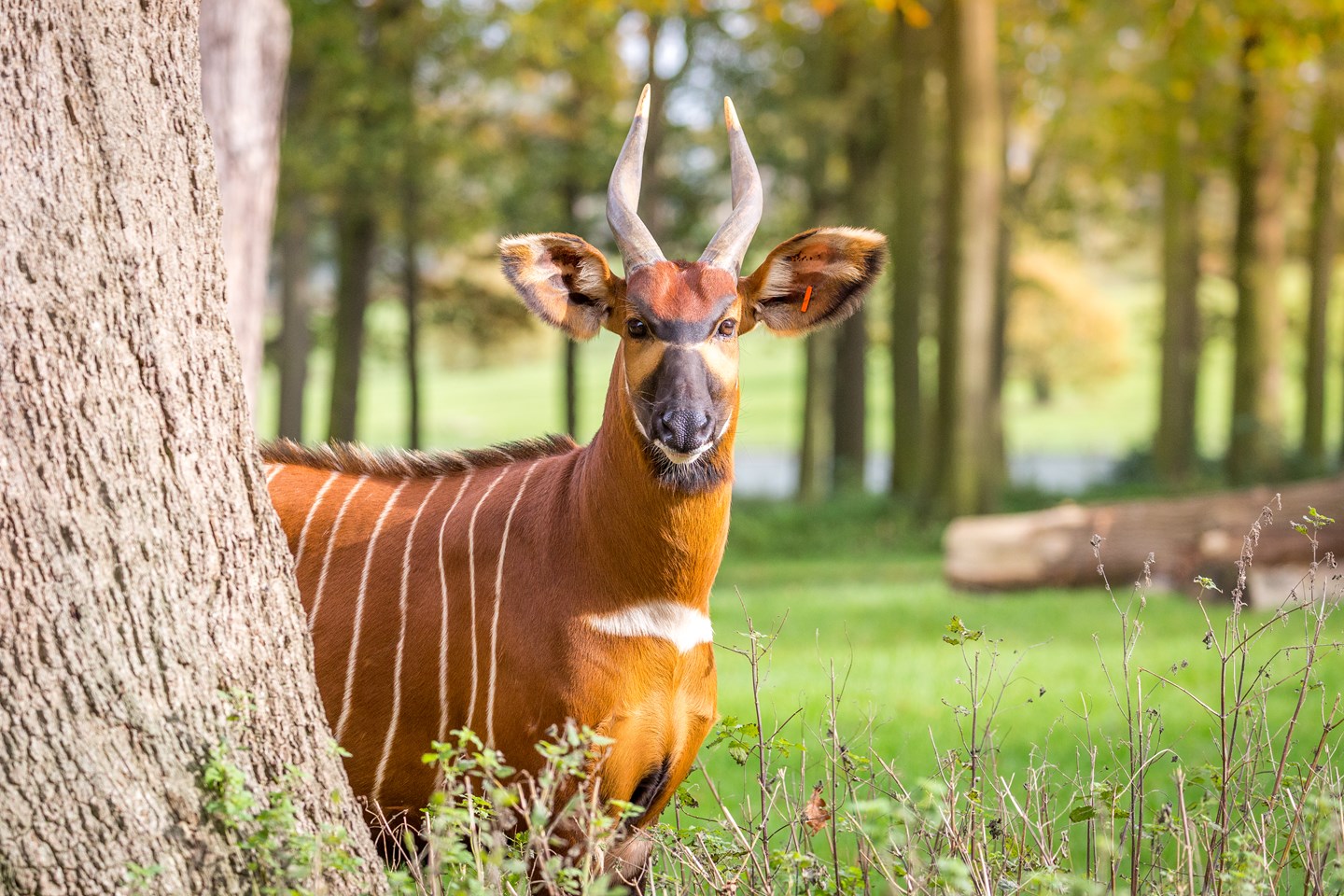 The Most Endangered Species in Kenya and Where to Find Them

With over 400 mammal species in Kenya, the country is blessed to be home to unique animal species that attract tourists from every corner of the world. While most wildlife in Kenya has a good life, sadly, some animals are endangered and threatened. Poaching and the ever-increasing population have led to more species becoming endangered. Luckily, most of these endangered species in Kenya are being protected in national parks, zoos, and private protected areas, places where Divulge Adventures can take you. Here is a list of Kenyan most endangered species and where to find them.

The roan antelope is one of Africa’s largest bovids, only exceeded in size by the African buffalo and eland. These antelopes have a grey or brown coat, a black-and-white clown-like facemask — that is darker in males than females — and long, tasseled ears. Both sexes have backward-curving horns, although they are shorter in the females. They live in groups of about 20 and it is led by a male bull. This antelope it at the brink of getting extinct as a result of having been eliminated from parts of its former range due to poaching which has seen most of them get killed and habitat loss resulting from human activity. In Kenya these beautiful antelopes can now only be found at Ruma National Park. Book a safari with Divulge Adventures and make a visit.

The sable is one of Africa’s most handsome antelope and renowned for its combative nature, able even to face down lions.  Adult males are a striking glossy black, with a white belly and badger-like white face stripes. Their majestic profile is accentuated by a powerful neck and long, backward-arching horns. Females and young are slimmer and chestnut-brown, with shorter horns. This shy antelope has been gazetted as critically endangered due to the most common causes such as poaching and habitat loss due to human encroachment. To view these beautiful antelopes, they can only be found at Shimba Hills National Park in Kenya. Check out Divulge Adventures top Deals and make a safari booking to explore Shimba Hills.

The gravy zebras are beautiful animals with a black and white striped hide. Among the three species of zebras, Gravy zebras are the most endangered. Unlike the other species, the gravy zebras are taller, have narrower stripes, a white belly, a brown muzzle, and large rounded ears. Their beautiful hides attract poachers and also factors like predation and overgrazing has led to the animals being listed as endangered. Grevy zebras can be found in Samburu National Reserve, Meru National Park, Marsabit National Reserve, and Lewa Wildlife Conservancy, Visit Northern parts of Kenya. Divulge Adventures is ready to take you there.

Black rhinos are Kenya’s large mammals that are most endangered. Their prominent horns that can grow up to five feet in length attract poachers. The black rhino differs from the white rhino in that they have a pointed upper lip because they are browsers while the white rhino has a square lip. Also, black rhinos’ calves follow their mother while the white rhinos’ calves trot along in front. The black rhino is Kenya’s most critically endangered large mammal. Therefore, rhino ark has been formed to create a rhino sanctuary. Places where you can book a safari with Divulge Adventures and get to to see black rhinos in Kenya include;

Among the antelope species, Hirola antelope is the most endangered and rare antelope. With a decline of 95% in the last four decades, the Hirola Antelope’s population now stands at below 500 individuals. The Hirola has a short neck, long legs, elongated face, and a sandy-colored coat. The beautiful antelopes live in the north-eastern part of Kenya in semi-arid areas. They can go for long without water and store extra fat in their body. They also feed at dawn and dusk. This helps in avoiding unnecessary energy-sapping activities. The Hirola antelope is found in Garissa and Lamu, as well as the Kenya-Somali boarder. Book a safari to the North with Divulge Adventures and your experience will be spectacular.

Mountain Bongo is the most unique, colorful and spectacular among the antelope’s species. It has conspicuous white stripes along with its reddish-chestnut coat. Because of its beautiful skin and scarcity mountain bongo was referred to as a prized trophy by hunters. Due to poaching, the number of mountain Bongos in zoos exceeds by far those in the wild.  You can see this rare mountain Bongo in Mount Kenya forest courtesy of Divulge Adventures.

Divulge Adventures can help plan a very interesting and involving safari to these locations as you experience the Magical Kenya and have panoramic views of these endangered species.